Can you believe it has already been a year since our last hurricane season update? Time sure does move linearly.

A quick recap: last year (2020) was forecasted to be an active hurricane season. An average season has 13 named storms but NOAA forecasted 13-20. We discussed that this was because a La Niña (the cool phase of ENSO) was expected to develop (see our last hurricane post). In reality we saw that a La Niña did rapidly develop in time for peak hurricane season with SST anomalies dropping to -1.3°C (-2.3°F). To say we had an active season is a huge understatement. We had the most named storms and most U.S hurricane (and tropical storm) landfalls on record. Damages from the season totaled over fifty billion dollars!

This year we are expected to have another active hurricane season1,2,3.

Were you lamenting or genuinely curious? Too late, we’re diving deep.

Last time we talked about ENSO and Atlantic hurricanes and how the warm phase (El Niño) is linked to reduced hurricane activity. Conversely La Niña and neutral phases of ENSO are associated with more hurricane activity. The La Niña from last year just ended two weeks ago (May 2021). Timing is everything though. If conditions rapidly transition into a weak El Niño, we could see reduced hurricane activity. If La Niña re-develops or even remains in a neutral state through September, we will probably have an active season. Model outputs (see below) suggest a neutral ENSO state for late summer/early fall, but this year the models aren’t in very good agreement. 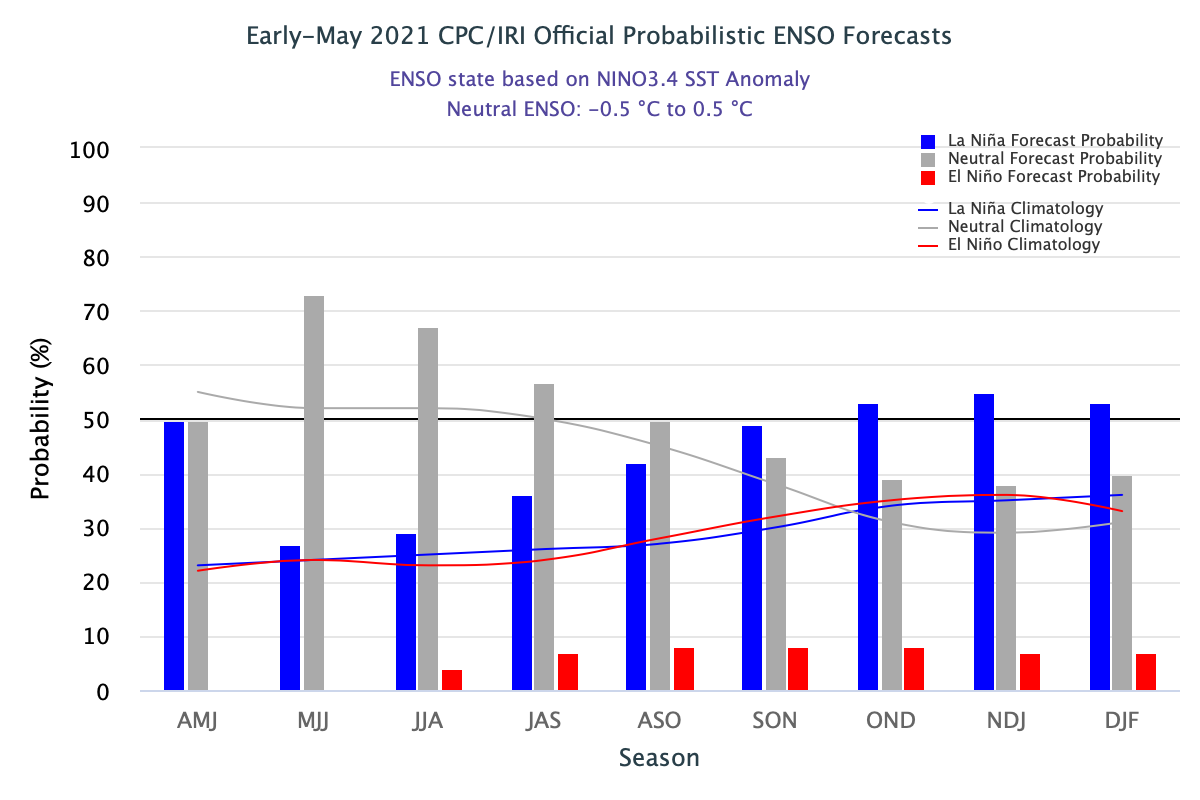 The official Climate Prediction Center/International Research Institute (Columbia University) ENSO probability forecast released in May 2021, with probability of each ENSO phase occurring during each 3-month period. Note that Aug-Sept-Oct (ASO) has a 50% chance of neutral ENSO phase and has the greatest probability of occurring over El Niño or La Niña.

Based on ENSO we would probably make a conservative forecast perhaps slightly above average. But the three major seasonal forecasts agencies all predict a well above average season. Clearly, there’s some other factor involved.

Last time, we mentioned Atlantic sea surface temperatures (SSTs) are important because they tend to persist into peak hurricane season but we didn’t go into detail about how they impact hurricanes. Atlantic SSTs are obviously important because warm waters fuel hurricanes but there is more to it than that. The first predictor used in Colorado State’s forecast is the warmth of SSTs by the west coast of Africa. When warm waters are present off the western coast of Africa, they tend to extend into the tropical North Atlantic and paired with cold waters to the south of the equator. This pattern of SSTs is called the Atlantic Meridional Mode, or AMM (Fun fact: other oceans have their own meridional mode!).

During the positive phase of the AMM there is stronger lower level convergence (winds colliding), so storms are more likely to form. There is more instability which allows storms to grow. There is less vertical wind shear and higher vorticity (rotation of winds) which allows thunderstorms to organize into a tropical cyclone. A lot of these atmospheric factors are linked to the AMM’s influence on the Intertropical Convergence Zone, or ITCZ.

The ITCZ is a broken band of clouds and storms that hovers roughly over the equator. Because the equator receives the most direct sunlight (on average) the air at the surface heats up and rises causing surrounding air to converge underneath it. Warm rising air helps fuel clouds and thunderstorms that make up the ITCZ. However, the ITCZ shifts with the seasons, for instance in June-July-August the Northern Hemisphere has more direct sunlight and heats up more and the ITCZ shifts northward (but it is still pretty close to the equator). The ITCZ also changes with topography. Because land usually heats up faster than the ocean, large land masses can tug the ITCZ poleward. Most importantly (or most relevant here) the ITCZ shifts with changes in sea surface temperature like in the AMM. The positive AMM causes warm air and convergence which pulls the ITCZ northward and with it a bunch of atmospheric conditions like instability that favor hurricanes. Also remember all of these favorable environmental conditions are occurring on top of warmer than average waters which is double trouble for the tropics. This year the AMM is our strongest predictor and it looks very positive which is a pretty good indicator that we will have an active season. This summarizes the main characteristics we talked about for the positive phase of the Atlantic Meridional Mode. Warmer-than-normal SSTs are located off the coast of Africa and cover much of the north Atlantic. This encourages the Intertropical Convergence Zone to shift more northward than normal, which favors hurricane activity.

Even in an active season, no one spot is likely to experience a hurricane. But, if you live in an at-risk area always be prepared because it only takes one. Check with the National Hurricane Center for official forecasts and advisories.